I stumbled upon this meme some time ago, and as soon as I saw it, I thought to myself: "True! That is exactly what women want!" Then I immediately thought of the movie by the same name: What Women Want, and it occurred to me that for all the posts I've written on relationships, I've never really broached the topic. Yet as with most relationship related topics, I do have an opinion... and this meme (unlike the movie) quite aptly summarized it. 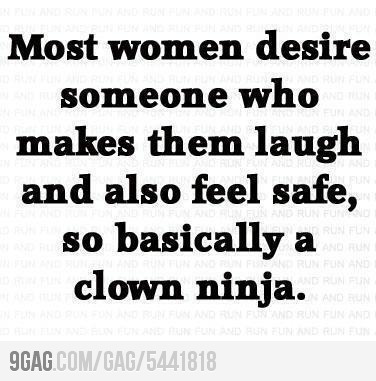 Many women mourn the death of the perfect gentleman. That old school type who tipped his hat and opened doors. Many will say that chivalry is dead, no one pulls out the chair or shows etiquette anymore. But no matter how much women complain about it, the lack of a chivalrous disposure never seems to be a deal breaker.

Times have changed and nowadays society's requirements for “a prince charming” no longer include the staples of noble social graces. In fact these days, some women prefer to open their own doors. I would even go as far as to say that women never really valued those chivalrous social airs as highly as they made out, but that society did. It would certainly explain the myriad romance novels about women running away with vagabonds to live happily ever after, but I digress...

You see, women love being treated like queens and princesses but they don't truly value it. What they actually value, is happiness. The difference being that happiness can be given in many ways, while acting like a gentleman has a strict set of habits and duties attached to it (that may not necessarily always bring them happiness).

However humour and laughter are a sure fire way to bring a smile to any loved ones face... and protection (though only necessary occasionally), will make a woman happy to have you by her side. Of course relationships go much deeper than that but if there's one thing I can say for sure, it's that you've got no chance with a woman if you can't at least make her laugh.

So the clown is more important than the ninja, because you'll only need to protect, every once in a while. Women want a clownNinja... But I think men can get away with just being clowns. 😉