Every man is a kingdom of 3 personalities. There's:

For you see, the King is always a good king. One who has earned the love and respect of his people, by always thinking of what's best for them. He is also always the wisest of his people and madly in love with the queen.

While the Commoners, like all peoples of any nation, are so engrossed in their own matters that they rarely ever see the big picture. Not a single one of them has the faintest idea of how best to rule the country, but they all have opinions on it, and they all constantly argue about it. In fact, they have only ever agreed on one matter... and that is: who should be their king. 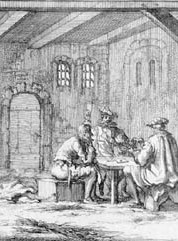 Imagine! These diverse and bickering people loved one of their own so much, that they all unanimously agreed to elect him as king! Sadly, the downside of this love, is that they never feel any woman is good enough for their "oh so wonderful" king. Meaning that, no matter how good the queen is, some of the people will find something to complain about. 24 hours a day, 7 days a week, all 365 days of the year.

Commoners have even been known to sneak other women into the king's mental chambers at night, trying to get him to take a new wife and oust the current queen.

Meanwhile like all great queens, the Queen is a real powerhouse. She truly represents the political prowess of the kingdom, and is adept at all forms of diplomacy. Unlike the King who is only ever concerned with local, regional, and federal issues, the Queen concerns herself with international relations. Signing trade agreements, drafting international policies, and making sure the kingdom remains a force to be reckoned with in the global arena.

But the Queen (God bless her soul), is forever unaware of the Commoners plotting, and remains deaf to their impassioned cries. Because the King, who doesn't want to hurt her feelings, tries hard to hide their insults and complaints. He puts on a poker face before her, and only ever mentions the people in a tentative fashion whenever their complaints become too loud - which as you can imagine, out of 365 days of the year, still turns out to be quite frequently.

So in the face of all this, every man must choose a system of government.

...and for every system of government, there are men who abide by it.

So if you are a woman looking to become the Queen of a man's heart, and perhaps institute a Matriarchy or Oligarchy, it is imperative that you understand the politics behind his system of government. So that you know who your enemies are, and can keep the people that matter content. You might also want to keep an eye out for any ex-queens, that may have been unjustly ousted by the commoners' schemes...