Now at this juncture, I could pretend that the things I have mentioned so far encompass my entire manic experience: An explosion of thoughts, words, and deeds, grounded in suppressed emotions. But in fact, these were only the tip of the iceberg: A fitting description, because such is all the world got to see. Beneath the surface however, I had reached a profound epiphany.

You see, the night before my episode, I had been doing what I usually do when faced with a formidable problem: Worrying, and looking back for wisdom. That night, the problem on the table was Urania. For some reason, she had become an inscrutable problem in my life. Because no matter how much I let time pass, my feelings for her would not go away, and no matter what I did, I could not change her feelings for me.

I was unwilling to yield to the suggestion that "some problems cannot be solved", and so I kept retracing paths, and simulating outcomes in the hopes that I would stumble upon a new approach. Now, I am not sure at what point my thoughts began to race. Nor am I sure how they became so fast that I was able to review my entire life in what seemed like the blink of an eye. But what I do know is that a point came where I felt I had caught a glimpse of my inner self... and what I saw, made me cry.

It made me cry because I saw a man who had been suffering in silence. A man who was hurt, and did not know how to adjust. I saw a man in a straitjacket of caution, made of adjustments to his character for every hurt he had ever felt. Now this man had finally encountered a wound out of his depth. A wound that his caution had failed to protect him from, and that his adjustments could not heal. 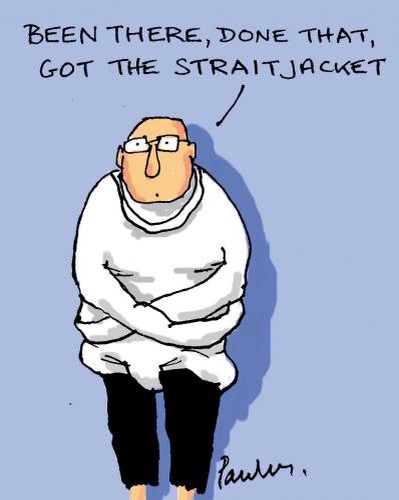 I saw a sad man in a straitjacket, and he was me.